Exited after a great meetup with lots of inspired GeekGirl+ women who listened to personal talks by multitalented artists Farvash Razavi and Julia Krantz. Erik Cederberg from Stockholm Makerspace gave a intro to 3D.

The white dress shows a project made by Julia Krantz, its called Whiteness, the project mixes fashion, photography and graphic design to create a series of images centred on a figure protected by loops of armour.

The artpiece to the right is made by Farvash Razavi as a master work for Konstfack in 2010.

Both Julia and Farvash made us all amazed by their unique approach to life choices and the combination of art, technology and
creativity. You rock girls !

Hope to see you all at the next GeekGirl+ meetup !

GeekGirl+ invites you to a evening in the 3D world with Farvash Razavi and Erik Cederberg..

Farvash Razavi – Creative Director at Rolling Optics and Independent Artist, will give us a insight into the world of possibilites with science and design under the theme – Communicating Matter

Erik Cederberg , Vice Chariman at Stockholm Makerspace, will guide us in the world of 3D printing and show some practical examples of how you can do it yourself.

18.45 A inspirational talk by Farvash Razavi

GGM+ sat down with Annika to talk about how her career and how it all started.
It turned out to be more of a coincidence rather than a planned career move.
The magazine The Futurist played a vital role in her early interest of tech trends and led her to visit the Stockholm Public Library a lot of times to get a glimpse of the future.

From there on it has been a ongoing process from the nineties where she started the first crossmedia agency in Sweden and learned how to code in 1998. Over the years her career has included a broad media experience, working with everything from journalism, publishing and advertising to television, product placement in feature films and a longtime focus on the Internet.

We asked Annika to share some advice to all GGM+ fans.
– I start everyday between 06.00-06.30 reading all my Feedly RSS sources to keep up with the latest news and trends. I recommend everyone to do the same, to find a time during the day to learn new stuff.
– Don ́t ask for help when it is time to do tech stuff, fix it yourself and learn by doing !

The same day we did the interview, Annika was invited to a roundtable discussion with Stefan Löfven, the Leader of the Social Democratic Party together with seventeen other carefully selected digital ambassadeurs to talk about a digital policy for Sweden. Let ́s hope they use all these great brains to create positive changes.

We will continue to keep an eye on Annika and her journey in the digital and tech world.

If you want to get a invite to a women power breakfast in connection with “Internetdagarna 2014” sign up here:
http://annikalidne.com/swedish-startup-sessions/sss2014

ESBRI offers GeekGirlMeetup´s network the opportunity to attend the  2014 Global Symposium on Women’s Entrepreneurship in Stockholm  17th-18th of  June with a 40% discount on the participant fee. The fee is 1300 SEK (ex VAT) but you pay 700 SEK (ex VAT).

At the symposium you will listen to speakers from Africa, Europe and USA and network with participants from 15-20 countries.

Come and hang out with us !

You can read more about it here.

After a jury voting the finalists was chosen from the Health Hack Academy 2014. All the teams did a amazing job after a weekend inside while there was a record hot summer outside.The partners and founders of Health Hack Academy is EIT ICT labs, Stockholm Science city, Stockholmsmässan and Veryday.

The kick-off of the Health Hack Academy took place at SUP 46 on May 8th with a workshop.

Susanne Fuglsang from GeekGirlMeetup+ was project manager for the following 48 hours Hackathon that took place the weekend after at EIT ICT labs venue in Kista.

The finalists from the hack will be presented at the Digital Health Days at Stockholmsmässan, 25-26th of August 2014.

Read more about it here.

I am blown away by all the amazing startups and new innovations that is developing in the healthcare and socialcare sector.

So it is truly a humbling learning experience to be involved in the final prep for Health Hack Academy´s 48 hour Hackathon tomorrow at EIT ICT Labs in Kista. The finalists will be presented at Digital Health Days 24-25 August 2014. Exited to see what all the teams will come up with for their final presentations.

If you want to come and meet the great hackers and watch them make their presentations for the jury and all the visitors you can register here:

If you want invitations to meetups, workshops and other stuff, sign up for our newsletter here: http://eepurl.com/UhbG

There are no upcoming events.

Work balance in the participation age ! Not so much, why ? Read this article @chuckblakeman inc.com/chuck-blakeman… via @Inc

Looking for the coolest gift to your kid, get a 3D printed actionfigure with their own face from #hasbro, businessinsider.com/hasbro-superhe… 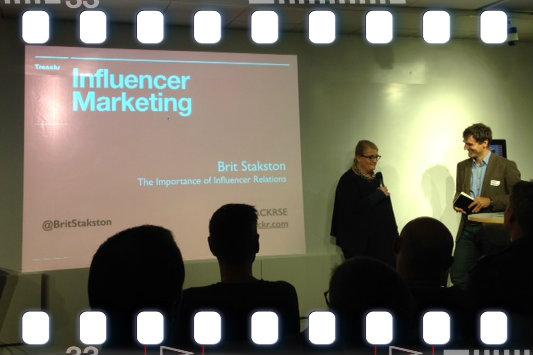